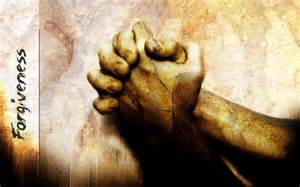 Forgiveness. This is such a simple word but such a profound concept. Forgive is defined as, “to stop being angry at or resenting someone or their behavior; to excuse someone for a mistake, wrongdoing, misunderstanding, or inappropriate behavior; to cancel an obligation, such as a debt”. It is one of those things we hear talked about a lot, especially at church. It is relatively easy for us to accept the notion of forgiveness when we are talking about things such as God forgiving our sins or when we have committed minor offenses toward someone else. What about when we have been legitimately wronged, or when we have committed a major offense toward someone? Are we as quick to gravitate toward forgiveness then? Are we willing to swallow our pride and ask for forgiveness? Are we willing to graciously forgive when we have reason for offense?

I think too often, when we find ourselves in a position where we have to lay aside our own pride, or we find ourselves with cause to be offended and hold a grudge, it is much harder to put what we talk about into practice. It is much easier to remain angry, to lash out in word and deed, or to rehash past offenses in an attempt to further justify our present behavior. In our anger and hurt we retaliate with nasty words, rash decisions, or the modern favorite, we take it to social media. In the eyes of the world our behavior is condoned. After all, it is only natural to seek justice and vindication when we have been wronged, right? Yes! This is the natural response. The only problem is that we live in a sin cursed world, and we are born with an inherent sin nature, so our natural tendencies are flawed. If we want to truly understand forgiveness, how it applies, and the motivation behind it, we must turn to the only source we can trust, the Word of God. So what does the Bible have to say on the subject?

In Genesis 45 and 50 we read of Joseph extending forgiveness to his brothers. Here is a guy who had every reason in the world to be angry and hold a grudge. He had been sold into slavery, sent to Egypt, and thrown in prison. Instead of holding a grudge, he forgave those that had wronged him, trusted that God was sovereign even over the bad times, and that He was working everything for good. In 1 Samuel 24:10-12 we read were David had the chance to take Saul’s life. Instead of seizing the opportunity to retaliate for the wrong that had been done to him, he forgave. He left vengeance in the hands of God where it belongs. Even when we are legitimately wronged we must extend forgiveness. The one who lashes out in order to execute justice himself will be punished (2 Samuel 1:14-17). We must trust that God can and will use the bad for good and has a purpose for it from the beginning, just as God had a purpose for Joseph being sold into slavery, namely the sustaining of a nation (Israel) from which the Messiah (Jesus) would eventually be born.

It is not forgiving to gloat when we see our enemy fall; this displeases the Lord (Proverbs 24:17-18). We delight in the holiness and justice of the Lord, but we must keep in mind that it is only by God’s gracious forgiveness that the saved are spared the fate of the unrepentant sinner. We shouldn’t be surprised when we are wronged and/or cursed by others. If we are honest with ourselves, we know that it is no more than what we have done ourselves (Ecclesiastes 7:21). Jesus said in Matthew 10:22 that we would be hated, so we should expect offenses to come; however, we leave justice in the hands of the One who is just. God will judge the wrongdoer, and He will reward the righteous behavior of the one who forgives (1 Samuel 26:23; Proverbs 25:21-22).

Forgiveness ultimately comes down to this: we forgive just as the Lord has forgiven us (Colossians 3:13). So this begs the question, how has the Lord forgiven us? He died for us while we were still sinners, enemies of God (Romans 5:8)! This forgiveness is offered by grace through faith to anyone who will confess that Jesus is Lord and believe that God raised Him from the dead (Ephesians 2:8; Romans 10:9). God in His omniscience, foreknowing all of our sins from before the foundation of the world, offers forgiveness to everyone and provided a way of salvation for any who would believe. That is how the Lord forgives us: graciously and completely unmerited on our part. That is how we are to forgive others: graciously even when completely unmerited on their part.

I pray that we will be graciously forgiving, that we will be repentant for the times that we have not been, and that we will be humble enough to ask for forgiveness when we offend. By forgiving as the Lord has forgiven us, we can restore relationships with each other, promote unity in the body of Christ, and ultimately glorify the name of our Lord while demonstrating His gracious love to a lost world around us.