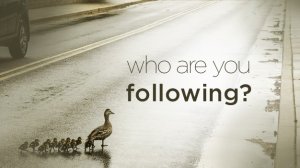 In light of the recent presidential election, I felt it an appropriate time to write about leadership. Regardless of whether or not your candidate won the election, the fact of the matter is we will have a new person in office come January. The term of one leader will come to an end and the term of another will be just getting started. You may look forward to this transition of power and authority with hopeful anticipation or dreadful anxiety, depending on which end of the political spectrum you find yourself. Political affiliations aside, I believe there is a deeper take away from all of this. As a Christian there is a deeper truth that must guide my life.

Joshua 1:1 says, “After the death of Moses the LORD’s servant, the LORD spoke to Joshua son of Nun, who had served Moses (HCSB). Here we have a transition of authority within the Israelite community. Moses had led the people since the exodus. Moses was leading them when they were delivered from slavery in Egypt. Moses was leading them when they crossed the Red Sea and received the Law at Mt. Sinai. He was leading them after they disobeyed and spent 40yrs. wandering in the wilderness. Now, when they are about to enter the Promised Land, Moses has died and a new leader is taking his place. Can you imagine the anxiety felt by the Israelite people? The uncertainty? The only leader they have ever known has died! What are they going to do?

God tells Joshua that they are to cross the Jordan and take the land just as He had promised Moses. In verse 5b God says, “I will be with you just as I was with Moses. I will not leave you or forsake you” (HCSB). Do you see the grace and comfort in these words? Through this change in leadership God is teaching the Israelites a lesson. The same lesson applies to our lives today. Earthly leaders will come and go, but God never changes! God reigns above every world leader! In fact, Romans 13:1 tells us that there is no authority except from God, and those that exist are instituted by God. God is not caught off guard by election results! He raises up leaders for a purpose, whether to bring prosperity or to bring judgement, and those leaders will bend to His will. Success or failure is not dependent on who holds political office. Rather success is measured by being obedient to the One who reigns above all!

Brothers and sisters, let us pray for those in authority that we may lead a tranquil and quiet life in all godliness and dignity (1 Timothy 2:1-2). May we put aside misplaced devotion to earthly leadership and devote ourselves to the LORD! The One who, by shedding His blood on a cross, paid the penalty for sin for any who would trust in Him for salvation. “Now to the King eternal, immortal, invisible, the only God, be honor and glory forever and ever. Amen.” (1 Timothy 1:17, HCSB)