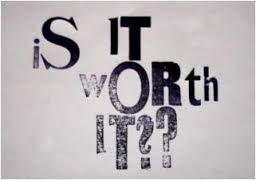 Have you ever stopped to consider that following Jesus may cost something? In a culture that is saturated with self-promotion, self-interest, and self-preservation it is easy to overlook that Jesus made it painfully clear that following Him has a cost. This may be a difficult concept to wrap our heads around and one that we may not even want to think about. After all, it is much easier to buy into the version of Christianity that says “surrender to Jesus and all your problems will go away”, “give your life to Christ and all your pain and difficulties will be no more”. We even have TV preachers telling us to send them money and God will bless you with material riches. They tell us to “live our best life now” and “make every day a Friday”. As I read my Bible and consider the words of Christ I can’t help but see a drastic difference between what our culture says following Jesus looks like and what Jesus Himself said following Him would look like.

There is a cost for following Jesus. In Luke 9:57-62 we see three would be followers of Jesus. They all seem eager and willing to follow Christ, but look at what Jesus said to them. He tells the first one that he can expect to be homeless. That following Jesus may mean that he does not even have a place to lay his head at night. The second prospective disciple says that he will follow Christ he just needs to bury his father first. Jesus tells him to “let the dead bury their own dead, but you go and spread the news of the kingdom of God.” Can you imagine Jesus saying that to you! I know your father is about to die but you need to be concerned with spreading the gospel and not funeral arrangements. The third one just wants to say good-bye to those at his house. Jesus tells him that “no one who puts his hand to the plow and looks back is fit for the kingdom of God”. In this text Jesus basically says that if you want to follow Him you must be willing to give up everything for His sake. You must be willing to sacrifice comfort, possessions, property, family, social status, safety, and even your very life. That sounds a lot different from the prosperity gospel that is often preached in our society! That doesn’t really sound like you’re having your best life now! This is not an isolated incident either. Jesus uses similar terminology in Luke 9:23-27, Luke 14:25-35, and Mark 10:17-22. If we are to follow Christ we must count the cost!

There is reward for following Jesus. There is indeed a cost for following Christ but there is also reward, and that reward is God Himself! Jesus said “whoever loses his life because of Me will save it” (Luke 9:24). In John 10:10 He said that He has come that we may “have life and have it in abundance.” Ephesians 2:1-3 makes it very clear that we are dead in our trespasses and under the wrath of God because of our sins. That means we are destined to eternity in Hell separated from God where we will experience His divine wrath that we rightly deserve. “But God, who is abundant in mercy, because of His great love that He had for us, made us alive with the Messiah even though we were dead in trespasses” (Eph. 2:4). Jesus, God incarnate, lived the sinless life in perfect obedience that we could not live. He gave His life on the cross dying the death that we deserved to die and thus satisfying the wrath of God. He made a way so that whoever believes in Him would not die but have everlasting life (John 3:16, Romans 10:9, 2 Corinthians 5:21)! If we are to follow Christ let us realize the reward!

To follow Christ means that we must count the cost. Consider the man in the parable of the pearl of great price (Matthew 13:44). He found a pearl of infinite value in a field, he then sold everything he had in order to buy the field and thus obtain the pearl. To follow Christ means that we surrender everything we have and everything we are to His Lordship. We may think the cost of following Jesus is great but the reward is infinitely greater. Yes there is cost and Yes Jesus is worth it!