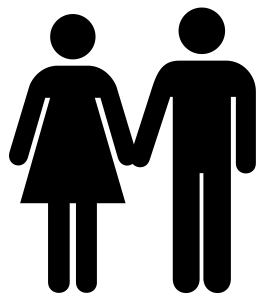 Complementarianism. In today’s society of liberal theology and the blurring of gender identity and roles this has come to be considered an ugly word and an almost unthinking concept. Many would have you believe that complementarianism is nothing more than an attempt to oppress women and have them domineered over by men all the while stripping them of their individual identity, will, and worth. Is this an accurate portrayal of all that complementarianism entails? I believe not! Furthermore, our beliefs of gender roles in general and how those roles relate to marriage should be shaped by God’s word. So we must ask ourselves, what does the Bible say on this matter?

First of all what is it and where does this idea come from? Simply put complementarianism is the theological concept that men and women have equal worth and standing before God, but have differing and complementary roles and responsibilities. This conclusion is arrived at by taking a look at the overall teaching of scripture. Both men and women are created in the image of God (Genesis 1:27) and as equal image bearers there is no hierarchy of status or value. However, they are created distinctly male and female with differing roles and the male (Adam) given primary responsibility, and thus accountability before God. Wayne Grudem says, “The creation of man as male and female shows God’s image in (1) harmonious interpersonal relationships, (2) equality in personhood and importance, and (3) difference in role and authority.” It is precisely this distinction in role yet equality in value that gives us a glimpse into the Trinity (one God in three persons) and the relationship between Christ and His church. This concept is seen most perfectly in the relationship between God the Father and God the Son (Jesus). Jesus is fully God (John 1:1-5; 10:28-30; Colossians 2:9) with equal worth and value as the Father, but He had differing roles and responsibilities. This can be seen in the Garden of Gethsemane where Jesus prayed to the Father not my will but yours be done (Matthew 26:36-46). He willfully submitted to the Father. The relationship between Christ and His church paint the picture of the proper relationship between a husband and his wife (Ephesians 5:22-32). The husband is to love and care for his wife as Christ loved and cared for His bride (the church). This is a sacrificial love even to the point of sacrificing one’s own life for the sake of his bride. Also, the wife should willingly love and submit to her husband as the church submits to Christ.

Just as everything else in creation, this complimentary relationship between male and female, and especially husband and wife, has been marred by sin. What we often see is men trying to establish a dictator style authoritarian approach to the role of husband. This is sometimes referred to as hyper-headship and can lead to emotional, verbal, and/or physical abuse. Likewise, wives can be rebellious to the leadership of their husbands or can become resentful. This is the essence of the curse in Genesis 3:16b where it says, “Your desire will be for your husband, yet he will dominate you.” In textual and grammatical context this is saying that her desire will be for her husband’s role or position and the husband will rule as a dictator over her. Taking into account the overarching story of the Bible on the subject we see that differing roles for men and women, especially in marriage, was part of God’s perfect creation. This relationship was then corrupted by sin, but would be redeemed by the blood of Christ on the cross.

It is evident to see that gender differences and roles exist, and this is a good thing established by God from the beginning of creation! Andreas Kostenberger said in his book God, Marriage, and Family,

“While the husband and the wife are fellow heirs of God’s grace (1 Peter 3:7) and while ‘there is no male or female’ as far as salvation in Christ is concerned (Galatians 3:28), there remains a pattern in which the wife is to emulate the church’s submission to Christ and the husband is to imitate Christ’s love for the church (Ephesians 5:21-33). Thus a complementarian understanding of gender roles is borne out, not just by a few isolated problem passages but by biblical theology as a whole. Apart from their joint stewardship, the married couple has an important witnessing function in the surrounding culture and ought to understand itself within the larger framework of God’s end-time purposes in Christ (Ephesians 1:10).”

When we fulfill our God given roles biblically we show the world a picture of how Christ loves His church and how the church submits to Christ. This is only possible with the help of the Holy Spirit as we repent of our sins and confess Jesus as Lord and Savior. May our lives and our marriages be used by God to glorify His name!